Besides being the central hub for tours going anywhere in the country, Panama City is a fascinating tourist destination in itself. It is also Central America's most attractive Capital City and a curious blend of old Spain, modern America and the bazaar atmosphere of the East. Best known for the Panama Canal, this lively Latin American city also borders one of Central America’s richest rain forests. The International airport "Tocumen" (PTY) is the main connection between the America's and the Caribbean Islands.

Panama City is a city of easy cosmopolitan living, a combination of the historic and the ultra-modern. And it is also one of the safest cities in the Americas. There are three parts of Panama City to be discovered: the historical ruins of the 16th century called Panama Viejo, the 17th century Spanish Colonial Casco Viejo part of the city and the modern skyscraper city with its prosperous business district and a city center full of live and cultural delights. The recent completion of the "cinta costera", a project to beautify the Bay of Panama City and to provide its citizens will recreation areas has added to the attractiveness of this city for tourists.

Ecotourism begins right on the outskirts of Panama City with the large tropical rainforest reserve called Parque Metropolitano. Along the five trails of this enormous park you will find a diversity of tropical wildlife, including toucans, parakeets, orioles, trogons, sloth, agoutis and Titi monkeys. We offer City Tours to introduce travelers to Panama City, the Panama Canal and the rainforest at the Metropolitan Park.

A visit to the Panama Canal is a unique experience, which can’t be reproduced anywhere else in the world. At the Miraflores and Pedro Miguel Locks, you can spend hours watching cruise ships and freighters moving through the Panama Canal. Called “The Eighth Wonder of the World” it today stands as a monument to mankind’s ingenuity and the power of conviction. Another way to see the canal is the Panama Canal Railway trans-isthmus ride. It takes you once a day from Panama City on the Pacific Ocean to Colon on the Atlantic. You can take the same train as the gold seekers on their way to California in 1851!

The Amador Causeway extends from the mainland to connect four small islands offshore. A palm-lined road runs the length of the causeway, with benches and a path for bicycling and jogging alongside. It is swept with sea breezes, boasts fine restaurants, the Smithsonian Institute of Tropical Research Aquarium, a new cruise port, yacht club, residential projects and souvenir shops. An ideal hotel to stay for leisure travelers is right in the beginning of the Causeway: the Country Inn & Suites Panama City. A new museum designed by Frank Gehry, The Bridge of Life Museum, is currently under construction on the causeway. 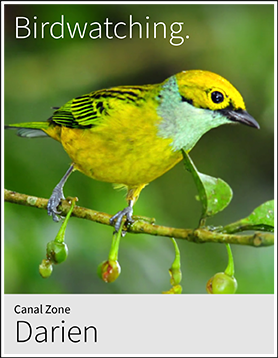 Our Panama City, Panama vacation guides can help you get the most out of this beautiful city. Fill out our Panama trip planner to get started!